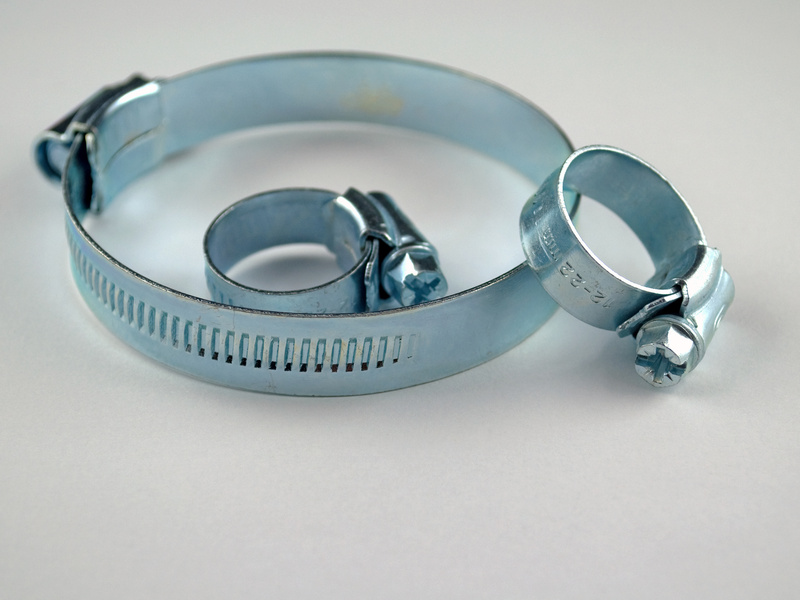 What is a hose clamp? A hose clamp, also called a hose climp, is an instrument used to attach, then seal, a nose onto a fitting. There are many types of hose clamps. Hose clamps usually cannot be used in situations of more than moderate pressure, since at higher pressures they would be unwieldy, large hose clamps. They are often used in automobiles and home appliances. At times they are often used for unintended purposes, operating like a permanent duct tape.

The first type of hose clamp is a screw and band clamp. These are made out of a stainless steel band, into which a screw pattern has been cut. The clamp is placed around the hose, and the loose end is fed into the space between the screw and the band. When the screw turns, it pulls the band threads, causing the band to tighten, or loosened if screwed in the opposite direction.

Spring clamps, on the other hand, are made from a spring steel strip, that is cut so that there is a narrow protusion on one end centered, while the other side has, on both sides, a set of narrow protusions. To use, the ends of these are bent out so that the strip can roll to form a ring. The clamp is slid onto the hose until the clamps are released, which compresses the hose onto the barb. These clamps, because of the nature of the metal, are not used for either large hoses or high pressure systems.

A wire clamp has a piece of steel wire bent in a U, then made into a ring shape with overlapping ends. A nut and screw are attached to opposite ends, so that when the screw is tightened, the overlapped sections spring apart, which tightens the loop when it is around the hose.

Ear clamps are stainless hose clamps that have ears where closing elements form. When the clamp is placed on the end of a hose, the ears are closed at the base and become permanently deformed. Upon installation, properly selected ear clamps should be almost completely closed.
For more information see this.